Teke of the Week – Timothy Hoch 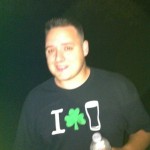 I pledged in the Fall of 1997 when there was a great transition within the Pi Mu chapter. Frater Gary Macri’s little brother, Troy Macri, was entering the school that year. Initially, I had no intentions of pledging a fraternity, as I was just happy to be in school and on the right path, after putting my parents and family through a lot in high school. However, the bond and persuasion of Troy and others left me no other choice then to pledge TEKE.

We all had the “best time we’d never like to do again” when pledging, as there was 11 or 12 of us! Our pledge class was different than the incumbent fraters of Pi Mu and brought a new life to the chapter. This was great for Teke as a lot of Fraters were graduating and getting ‘long in the tooth’. We had a great slogan, as we were the Alpha Zi pledge class. Our slogan was “Alpha Zi, do or die”. We immediately made an impact on campus as the biggest pledge class. Everyone knew TEKE that year and for many years to come.

I ended up leaving Buffalo State four years later in the Spring of 2001, with my soon to be wife Danielle DiGaetano. I met her at a ‘tie-me up / tie me down” mixer! She was in the Phi Sig sorority. We are still married today and have been together for over 13 years. The main reason for transferring was that I had a great professor at Buffalo State that rekindled my passion in Business and Accounting. Sense Buffalo State didn’t have Accounting as a major, I transferred to a great school in South Carolina, The College of Charleston. I had a great time there, but my wife got pregnant and we moved to Rochester NY two years later.

As my daughter was born, I was working as a waiter, ‘Temping’ as an Accounting Clerk, and finishing off my Accounting Degree at SUNY Brockport. From that degree I have worked for organizations such as Paychex and Frontier, to name a few. I have now been a Financial Analyst for over eight years and currently work for Hillside Family of Agencies.

Hillside is a non-profit organization that generates over $130 million dollars in Revenue, the biggest in Western & Central NY. I manage a budget consisting of over $105 million and meet with the Regional Leaders throughout the Central and Western Regions. It can be challenging at times, as I am trying to teach Regional Managers, who have their degrees in social work, about how to balance their budgets with limited resources. I report directly to the Director of Finance and consistently get outstanding reviews. If anyone at the Pi Mu chapter needs a reference or sees an opening they would like to pursue at Hillside.com, feel free to email me, and I will send your resume to the Regional Leader directly. That doesn’t guarantee you the job, but it will most definitely help, especially if it is an entry level position.

To recap, Pi Mu has introduced me to my wife, who has given me two beautiful children, the greatest gift I have in this world. It has also given me lifelong friends. Everyone in my wedding party who was wasn’t blood family was part of the TEKE family. There is still a strong bond between us all, and we do our best to keep in touch. One of the nicest traditions we have is that Jay Pritchard still gets everyone together on his land in Oswego for Harbor Fest. There are fraters who fly in from Florida to attend! It truly isn’t about the party, but more about getting together and laughing like we used to do. I wouldn’t change anything about my days in Buffalo State except maybe that the four years went by too fast. I owe a lot to Musky and the Pi Mu chapter who have given me, not only some of my happiest moments as a young adult, but also life long friends that will stand the test of time…YITB